Jujutsu Kaisen: The Bromance Between Todo And Itadori 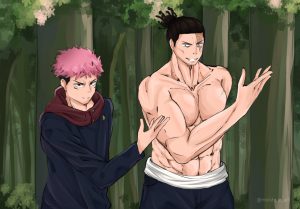 Jujutsu Kaisen follows Yuji Itadori, who stumbles upon Sukuna’s finger that thrusts him into the supernatural world. After swallowing the finger, he joins the Tokyo Metropolitan Jujutsu Technical High School to become a Jujutsu sorcerer.

Released in 2020, Jujutsu Kaisen gained tremendous praise as a shonen anime. Many fans were particularly enamored by the fast-developed friendship between Yuji and another sorcerer in training, Aoi Todo.

Aoi is a student at the rival Kyoto Jujutsu Hugh School. His first actions were to attack Yuji’s friend, Megumi Fushiguro. Despite the rocky start to their relationship, they have become best friends and even brothers. All in the span of one battle.

With the fast-paced nature of their relationship, many Jujutsu Kaisen fans were a bit confused. However, due to clever writing, it absolutely works.

How did Aoi and Yuji become friends in Jujutsu Kaisen?

The pair met in Episode 14 of Jujutsu Kaisen. True to high school-aged boys, Aoi’s perception of other boys relied on their “ideal type” of women. In Episode Eight, Aio was displeased with Megumi’s answer to his question about what kind of woman he is attracted to. He even proceeded to beat him up.

In Episode Two, Yuji introduces himself to the principal of his school, Masamichi Yaga, by describing his ideal type as “Jennifer Lawrence.” This shows that the groundwork for Aoi and Yuji’s relationship has been in the works since Episode Two.

In Episode 15, when Yuji and Aoi face off during the interschool competition, Jujutsu Kaisen viewers weren’t surprised that Aoi asked Yuji about his ideal type. With his answer already established, Yuji repeats it. Because Aoi relies solely on this question to determine a potential friendship.

Of course, he is pleased and engages his overactive imagination upon hearing Yuji’s response. This led to the commencement of a beautiful yet strange friendship.

More about the pair’s friendship

Aoi is seen concocting a fabricated flashback surrounding his and Yuji’s friendship. As comedic as it was, it also made Jujutsu Kaisen viewers feel a sense of nostalgia by invoking a love confession subplot.

It’s no question that Aoi is delusional, as the series cuts back to the present reality of the Jujutsu Kaisen world. Then, the competition was interrupted by high-level Curses.

Remember in Jujutsu Kaisen when Todo fought Itadori and made up an entire backstory of friendship on the spot? Good times! https://t.co/hGd94p41Xs pic.twitter.com/8GzmRmWNhV

As it does to most, a shared enemy strengthened the bond between Aoi and Yuji. Together, the pair faced a special-grade curse, Hanami. Aoi helps Yuji to achieve a new skill level. With Aoi’s special move revealed, the two took control of their fight against evil.

Throughout one of the most epic fights of Jujutsu Kaisen, Aoi started referring to Yuji as his “best friend”. A term from his junior high delusion. Despite his initial confusion, the adrenaline and excitement of the battle at hand caused Yoji to start to reciprocate Aoi’s affection.

These nicknames and the knowledge of their fantasy-based origins offered comedic relief during the intense fight, which makes sense at the moment because of the high emotions of Aoi and Yuji.

This battle is where the most relationship development occurs. By the end, the pair were working harmoniously, even referring to each other as “brother.” Even after the battle subsides, Aoi still treated Yuji with the same adoration as before.

Conversely, Yuji remained non-delusional and admitted he was only caught up in the heat of the moment. By allowing him to reflect on the quickness of the relationship, Jujutsu Kaisen guards itself against rushing their bromance.